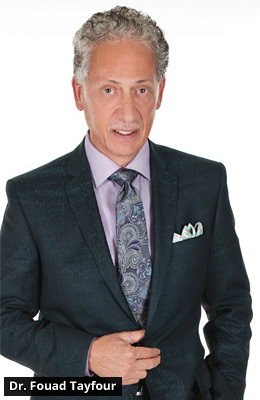 Dr. Tayfour graduated from Damascus University Medical School in 1979 and spent three years in postgraduate training there. He arrived in Canada in 1983 where he joined the University of Toronto Ophthalmology program and finished his training in 1987. The following year he completed his retina and vitreous fellowship at the University of Toronto and later received his fellowship from the Royal College of Physician and Surgeons of Canada.

In 1988 he started his private practice in Windsor and within three years he was able to build the largest cataract practice in Canada.

Dr. Tayfour was a very early adapter of laser refractive surgery when he performed his first PRK cases in 1991 and he was the first to introduce LASIK to North America in 1993.

Over the last 20 years Dr. Tayfour's experience and commitment has provided his patients with the superior results they deserve, enabling him to build one of the largest cataract practices in Canada with over 2000 procedures performed each year.

When asked about his proudest achievement, Dr. Tayfour responds with the following; "The ability to provide the community with world class eye care in Windsor, enabling patients, most of whom are elderly, to stay in their own community for their eye care treatments."

Dr. Tayfour was instrumental at building an extremely efficient surgery suite at Hotel- Dieu Grace Hospital, which became the model program for maximizing efficiency during cataract surgery, which was adopted all over Canada.

Further to his professional achievements, Dr. Tayfour remains very involved in his community. He is past president of the Windsor Islamic Association, he is presently on The Board of Governor's of the University of Windsor and is a member of Coalition 12, a group of entrepreneurs who mentor entrepreneurs in the making.

In 2015 he established the Tayfour Family Foundation, which focuses on health care and education. In recognition for the foundation's generous donation to Windsor Regional Hospital Western Campus, the hospital named its Western Campus after Dr. Tayfour as well as the newly renovated tower building. Other local charities that benefit from Dr. Tayfour's generous support and desire to give back to this community are; Transition to Betterness, The Hospice of Windsor and Essex County, The Alzheimer Society of Windsor and Essex County, The Heart and Stroke Foundation, W.E. Care for Kids Foundation and others.

Dr. Tayfour's commitment to his community has been recognized with the Queen's Golden Jubilee Medal in 2002, the Believe Windsor Award, the Windsor Roseland Rotary Club Vocational Service Award and the American/Arab Anti-Discrimination Committee Award.

He is honored that his efforts are being acknowledge again with the Queen's Diamond Jubilee Medal.

Don't take your vision
for granted.

Book your complimentary consultationAnd discover the freedom to enjoy life